Skip to content
You are here:Home-Ecommerce, Featured, Shopify-Raising $1M on Kickstarter To Launch A $500K/Month Time-Saving

Raising $1M on Kickstarter To Launch A $500K/Month Time-Saving


Hello! Who are you and what business did you start?

Hello! My name is Olivier Momma, and together with Rick Scharnigg and Richard Canneman, I founded Ekster. We make time-saving designs for smarter living; products that’ll make every day easier for you. 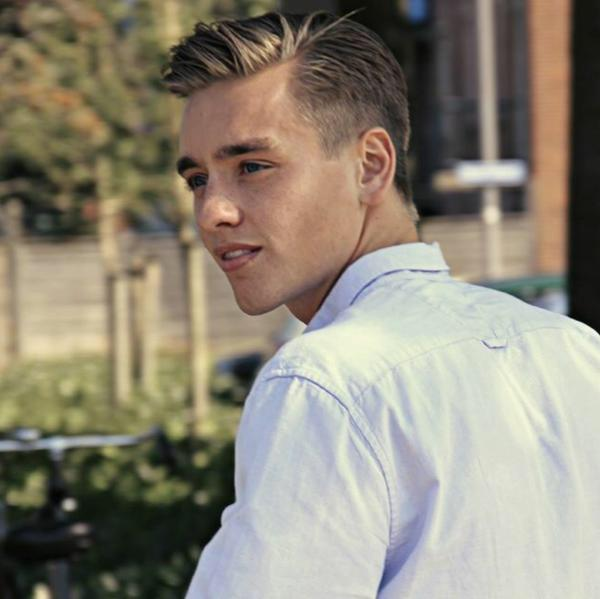 Our flagship products are the Parliament wallet, an upgrade on the traditional leather wallet, and the Tracker Card. The Parliament is still made of leather, but that’s about the only thing it has in common with your old George Constanza. It’s compact, sleek, and fits in your front pocket – like any other cardholder, except for the quick card access mechanism, which you can use to access all your cards with one click. You can also track your wallet with the Tracker Card, which runs on solar energy, and only needs two hours of sunlight charge every three months.

We’ve released four different lines of the Parliament wallet, along with other slim carry products like the Senate Cardholder, the Secretary Cardholder, the iPhone Case, the Laptop Sleeve and the Cash Clip; our most recent release is the Modular Secretary, a bi-fold wallet with a removable magnetic cardholder inside. We’re also venturing into other areas of everyday carry, starting with our Key Holder and Key Tracker, which we actually went live with on Kickstarter in March.

We launched in 2015, as a team of two in a classroom. Today, our team has grown to 20 people in an office in the heart of Amsterdam. We’re also the world’s “most successful smart wallet brand”, according to Forbes.

We launched the company on Kickstarter, a few months after Rick and I met in the USA. We were both on a Fulbright scholarship in Pittsburgh, and being Dutch gave us something to bond over. Both of us knew from day one that we wouldn’t end up working a 9-to-5 job and were both keen on building something from the ground up. In addition, we had a couple of frustrations in common, one of which was; why are all the things you carry with you on a daily basis not evolving as quickly as our phones are? Take the traditional leather bi-fold wallet for example. Why does it have so little security built into it and why is it still so bulky?

I quickly learned that Rick was always searching for his wallet, his cards, his keys – sometimes he found them, and sometimes he didn’t – but we spent so much time looking for stuff that we thought, hey, we can probably make this easier. A quick search on Kickstarter validated our frustration, we were going to build the “Next Generation Wallet”.

We validated the product through market research; we started with our own demographic and surveyed our peers to see if there was an interest in what would become the Parliament. We received positive responses, which gave us one certain demographic to work with. A big part of building Ekster was using our own frustrations, little annoyances which we wanted to go away, to make products that can do the same for other people.

Good partners are key. It’s sometimes okay to pay a bit more to get the service you need, especially in fulfillment.

We were students at the time, so we looked for someone with more career expertise and found Richard, an EDC enthusiast, who came on board as the third founder. We then went to Kickstarter for the first iteration of the wallet, and we’ve been back three times since then (twice for new generation wallets, and now for the Key Holder).

We actually started with a monstrosity of a wallet which we put together ourselves, the “Frankenstein” original which we made from different materials. These were early days, so we didn’t have designers and we drew everything ourselves. We also had to explain it to the factory because our drawing skills do leave a lot to be desired, so that was interesting. I definitely think that was a steep learning curve for us – we spent so much time explaining what we wanted at factories that in the process, we ended up learning a lot about leather and the way that different factories work to put a wallet together.

We started with the idea of producing close to home, but we quickly found that it wasn’t really a viable route to go. Partners were expensive, slow, and their expertise was underwhelming. As soon as we abandoned that idea and went to China, everything became much more possible. Light speed, a much better price – we found our manufacture through a mutual contact, and we’re still producing most of our products with them. Developing that relationship has been invaluable for us over the last few years.

We also applied for a patent immediately, but the process is very long, and we’d advise anyone going through it to be very patient.

Our launch, from conception to going live on Kickstarter, took us about a year. It was tricky because we were starting from scratch, so the website, assets, internal processes – everything was done at the same time. It helped that Richard has worked in IT & web design, which sped everything up quite a lot. It’s also what informs our decision to keep most content creation in-house; we learned early on that it’s far easier and more efficient to make changes with our own teams.

We launched our first campaign in 2015 and raised over $350k within 40 days, and $1M within the first year. This is when we knew this product would make a real difference in the world.

Our biggest lesson was that even with close to zero budget, and zero experience, you can make your ideas a reality through crowdfunding if you are determined enough.

We’ve really leaned on Kickstarter campaigns as a big source of growth for our company. While most of our operations are in-house, I’d recommend working with a good agency on paid advertising; it can be the difference between a failed launch and a best-selling product. I think aside from that, there are three crucial areas you should focus on for growth when you’re marketing a product like our wallets: influencer marketing, PR strategy, and email marketing.

We also jumped in with a solid influencer marketing strategy, given the visual element of our wallets as well as our core demographic being active on Instagram. PR strategy is the same; we have an in-house team that handles all PR, and that’s helped us to build networks with journalists who are invested in our brand now. Here’s some coverage on us: 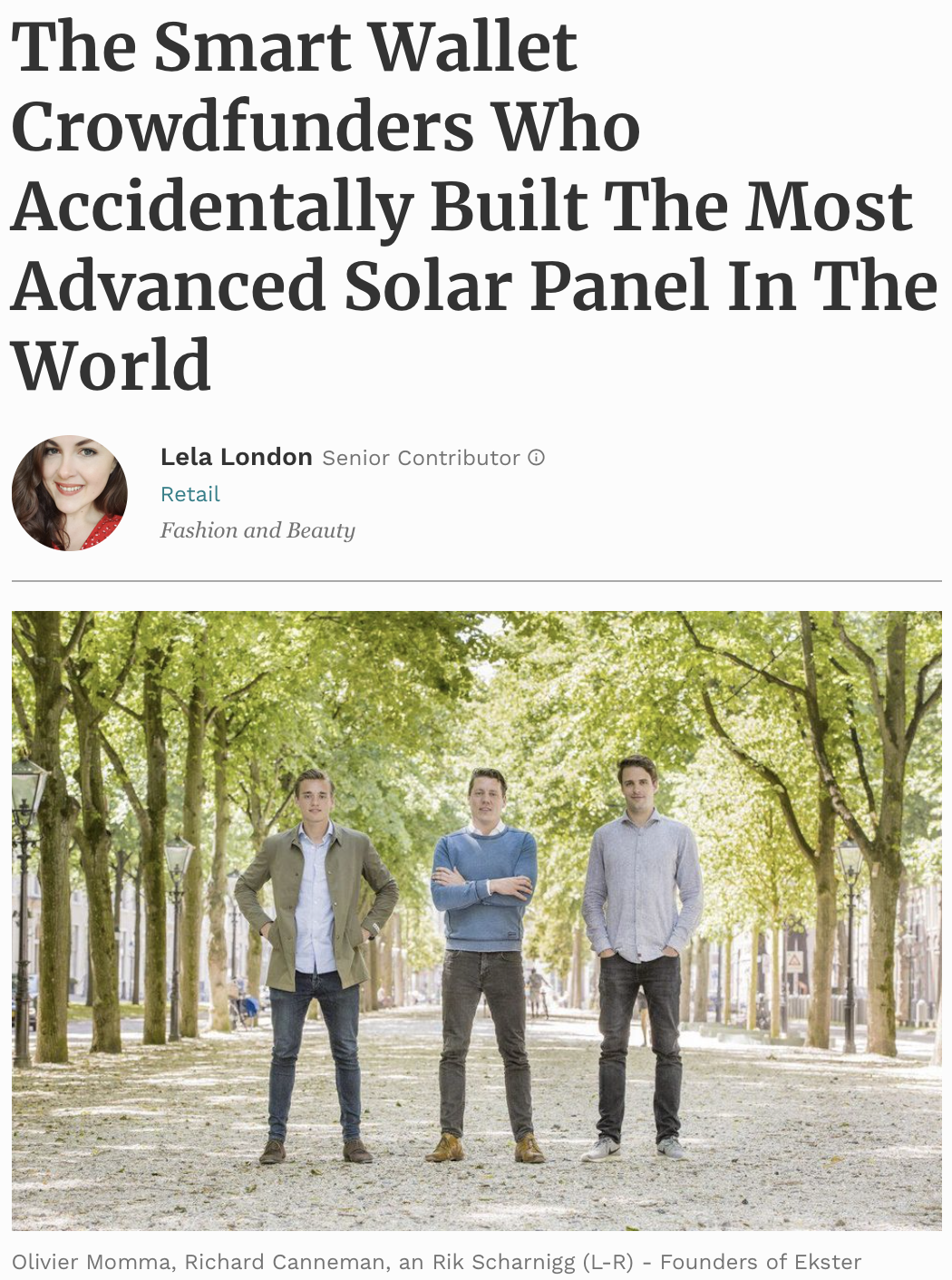 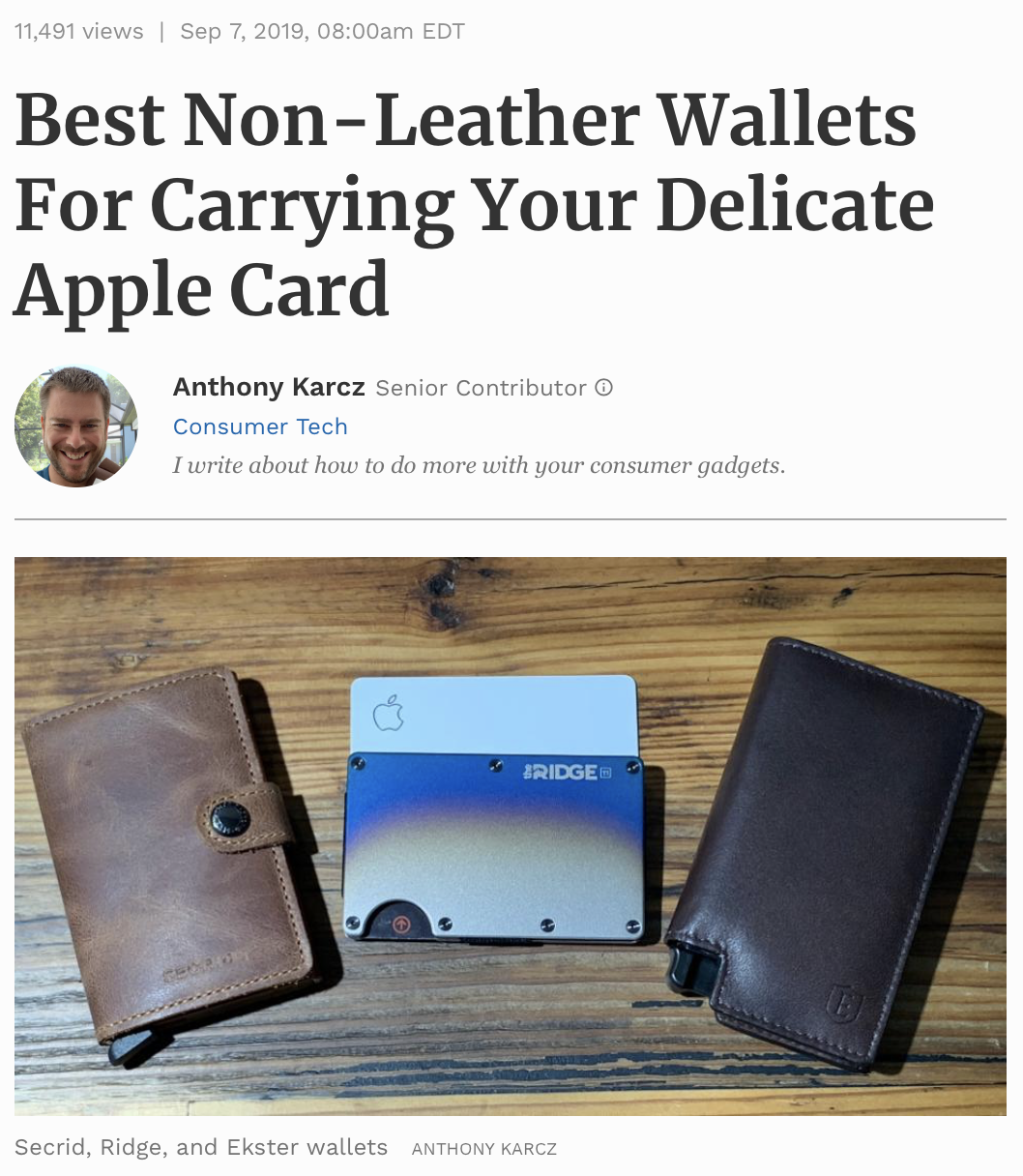 Email marketing is crucial to set upright. Good email marketing strategy incorporates drip campaigns and detailed sequences whilst segmenting your audience; it’s one of the biggest tools and data sources at your disposal.

We bring existing customers back with email marketing flows, retargeting on paid channels, and releasing complementary products. Amazon’s been a really good sales channel for us as well; especially with most of our market share in the USA, a lot of traffic that starts off at our webshop and ultimately converts from Amazon, and that works out for everyone. We’ve also found Amazon ads to be a good investment for us.

Crowdfunding is the best tool out there for market validation, proof of concept, and early-stage funding. It gives you everything you need to get a product out.

We have three new products coming up: 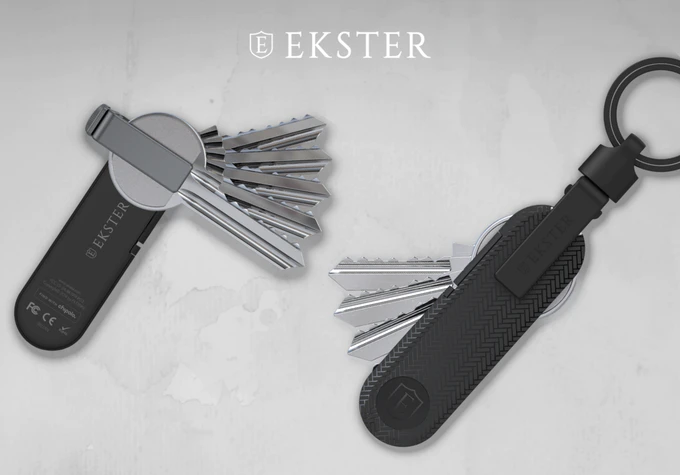 The Ekster Laptop Sleeve: Designed for laptops, tablets, and tech accessories, this sleeve is built to make your workday seamless and stress-free. This limited release is now available in three colorways, fifty units per color. Available here. 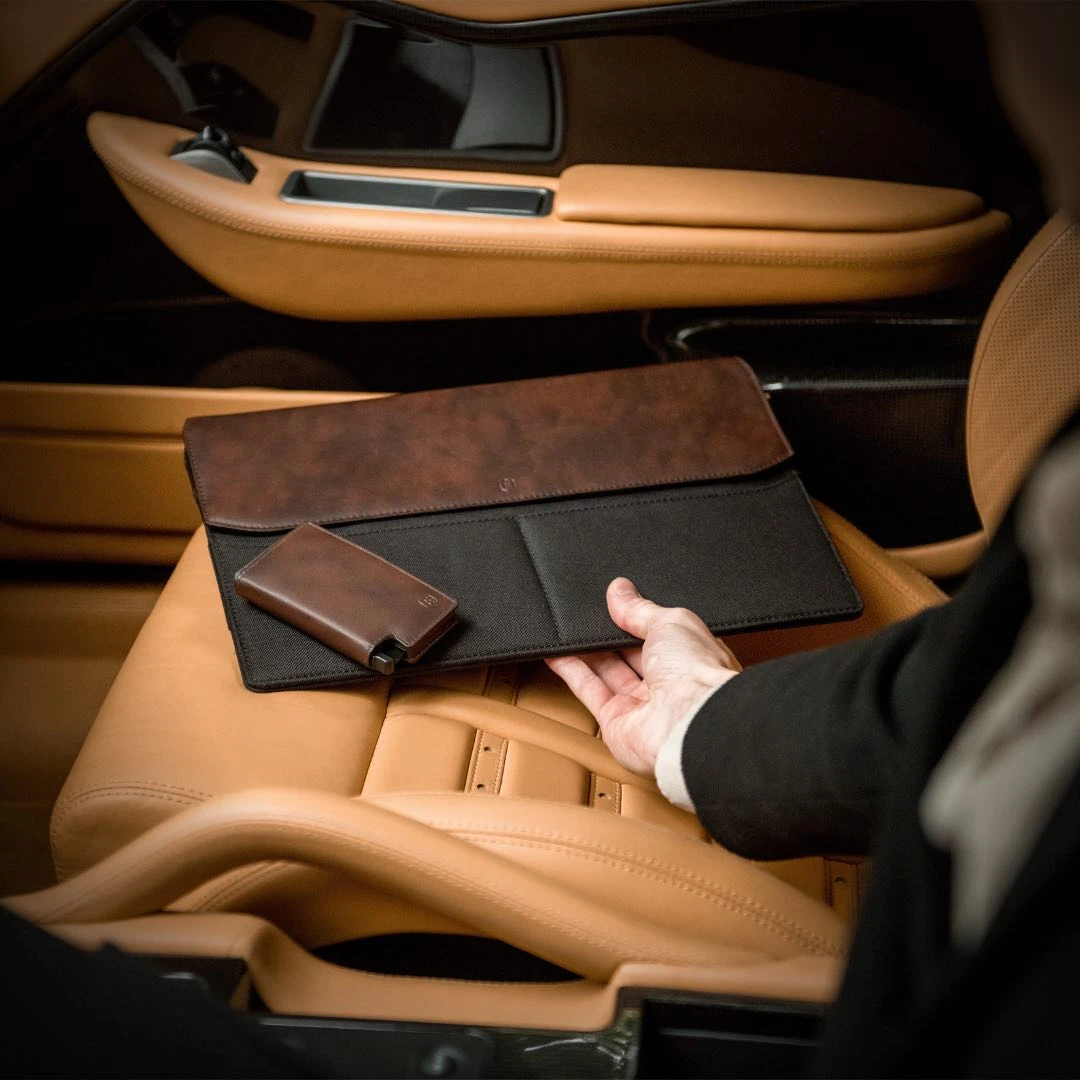 The Recycled Collection: Before it was a wallet, it was a windshield. Introducing our first-ever vegan line, the Ekster Recycled Edition. Available in three beautiful tones: Earth, Sand, and Charcoal. Sign up here to get on the list. 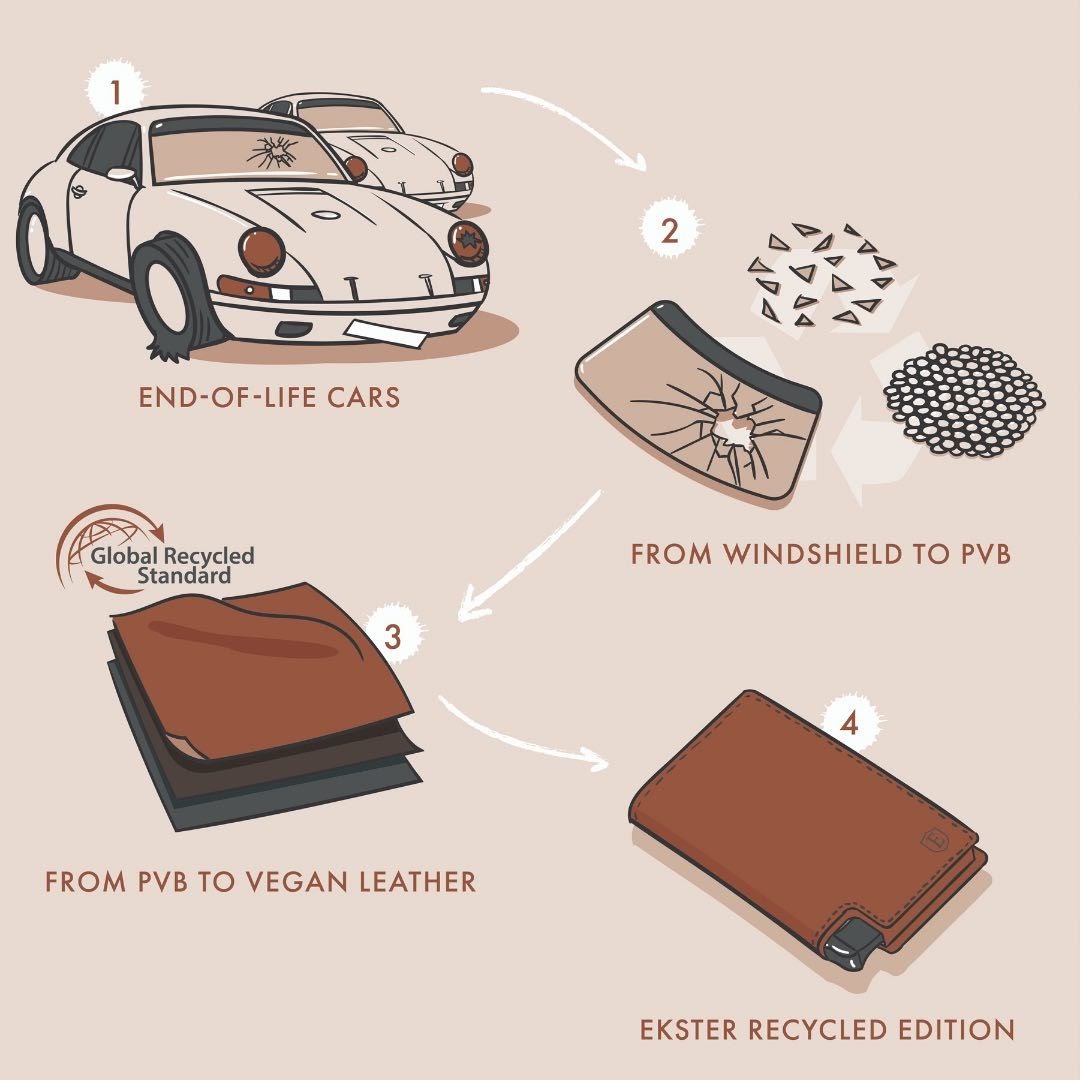 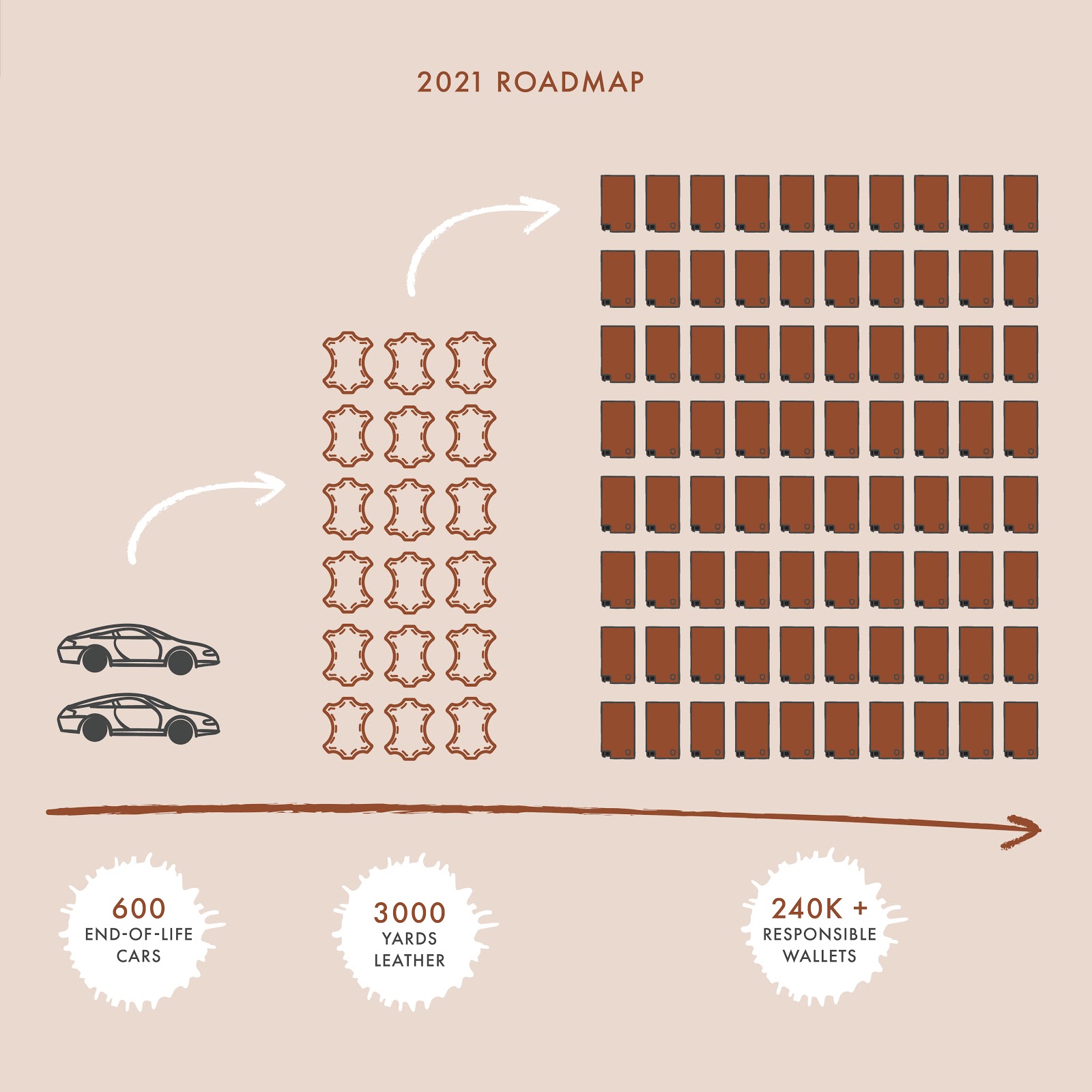 We’re mostly online, but also available in 50+ retail stores worldwide. We produce in Asia but source our materials from all over the world.

We’ve had a lot of really steep learning curves, which are tough to get through, but you really look back and see how much you learned in a short period of time. We learned a lot from our first Kickstarter, and it was great timing in terms of hopping on to a trend.

For us some of the biggest challenges arose from taking the wrong decisions on people; working with different teams on important matters meant relinquishing control, sometimes to our detriment. We’ve learned that good partners are key. It’s sometimes okay to pay a bit more to get the service you need, especially in fulfillment.

It’s also really easy to get into this mindset of trying to make everything perfect. Sometimes you just need to go, do a launch, get the word out, instead of waiting for the perfect way to do it. It’s also important to focus on what you’re good at – for us that was staying in e-commerce, instead of branching out to retail.

We also always benchmark with other companies to see how we can learn from their mistakes. As a startup with little experience in the field, you need to get up to speed quickly, and there’s no better teacher than other successful companies already out there.

We use Shopify with the following third-party apps:

Crowdfunding is the best tool out there for market validation, proof of concept, and early-stage funding. It gives you everything you need to get a product out. Oh, and never work with a PR agency. 😉

Are you looking to hire for certain positions right now?

Yes we are! Check our careers page.