Hi! Tell me about you and your business.

I am Travis Peterson and started Joker Greeting. We make original prank gifts and prank non-gifts for friends, family, and offices. It all started with a non-stop musical greeting card that looped for 3-6 hours.

For 2.5 years, I have been working on making musical greeting cards interesting again. To be clear, I never intended on making a greeting card or joke company, but we launched on Kickstarter and raised $92,073 in 30 days with no marketing, so I decided to give it a shot. 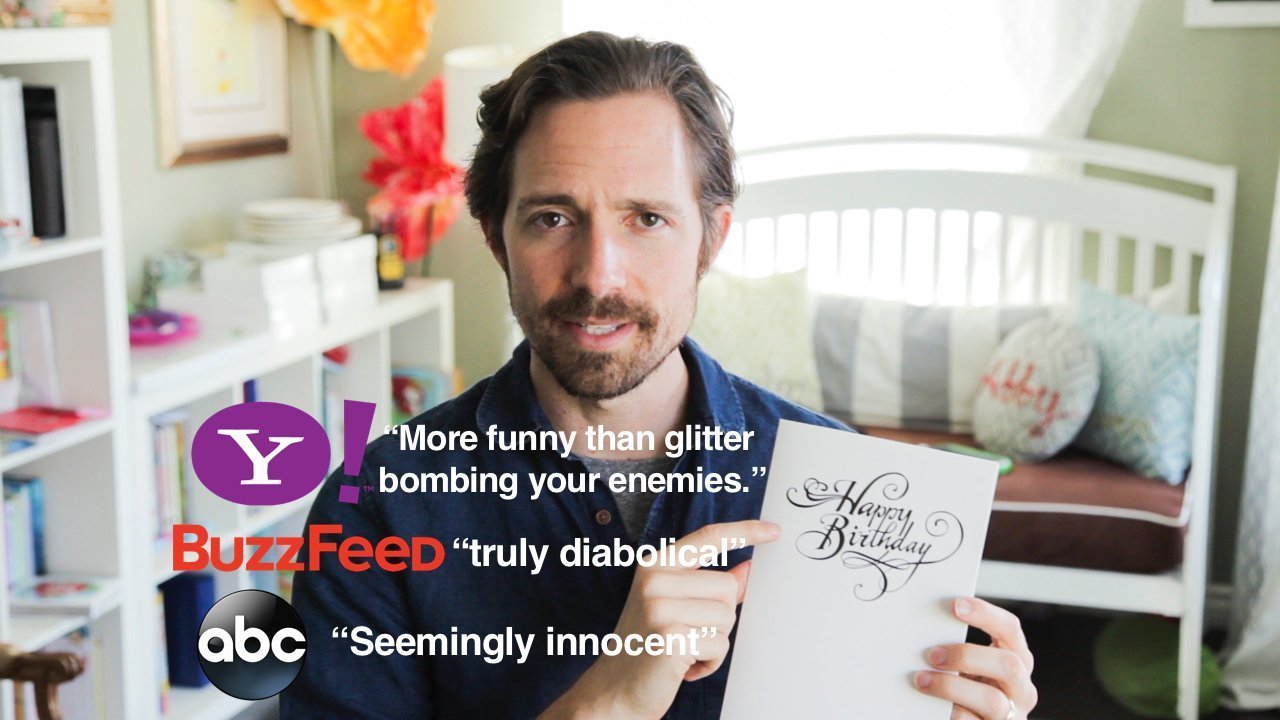 My background is in finance. I worked in investment banking for six years in New York. I loved the job, the people, and the hours. But as a service job I wanted to be making things not just helping others make things. This desire has led me to where I am today.

My brother and I have always loved to make fun of everything. Around 2014, we visited my mom’s house and she had this musical greeting card. We thought it was annoying. We asked each other, “Who wants to listen to this!?” Then Nick asked, “What if it didn’t stop?”

That was it. Nothing more. No market research.

So the plan was to make a funny musical birthday card that looped non-stop with no off switch. Seriously, no off switch. It would just loop non-stop for 8 hours. We set a goal to make $1,000 in profit – that was it.

We picked Kickstarter because my brother had used it to fund some short films he directed. He raised $10k to $30k already on a few of them. Neither of us had ever made consumer products like this. But we are both creative and starting this didn’t seem like a giant leap with any huge upfront costs.

Describe the process of creating the initial version of Joker Greeting.

This was the real challenge is remains to be the biggest hurdle. While some people did mention that “musical greeting cards are dead, don’t do it”, I just ignored that and moved forward. Googling “custom musical greeting cards” leads to zero results. We were able to get some quotes, but they were absurdly expensive.

Eventually, we found a broker. We pay more for the product than we originally wanted, but they are great and help me achieve all the crazy ideas we have. It’s been a great experience so far, and they deliver a super solid QA process. They mostly focus on designing our ideas (the internal engineering), and we create the look and aesthetics, and then make a few iterations. Simple ideas need a lot of work too. Once we had the first iteration of the product, we were able to push the boundaries and add new features. It was fun.

Make a product people want to buy not one you want to sell. If you are pushing too hard to make a sale it’s probably wrong.

I bought 1,000 units and received them about eight weeks later. We thought we could only sell about 750 units and we would use some for marketing and personal use.

We launched on Kickstarter – we didn’t have a brand, website or anything.

We hit our $7,500 goal in 3-4 days after being picked up on CNET, and ABC News. Later it was BuzzFeed and Gizmodo and more. This was when I learned what “going viral” truly meant and how making a great product can matter so much more than making a just a good product.

I have no tips or tricks for going “viral.” In our case, it was 99% organic luck and 1% blood, sweat and laughs. We sold way more than 750 units and ended up making 15,000 units and making some small improvements and shipping those new ones. I don’t think we actually shipped any of the original batch to backers (they worked but we wanted them to look better). We designed some packaging for the cards with instructions and some marketing material and that was it.

So how did we go viral? I don’t think anyone can narrow it down. We launched on April 1st (April Fools Day) – I think that might have helped. Was it a joke or was it not a joke? The video was great and new and that helped.

We also created some funny videos content to go along with it. We had a video showing the card not break – it had 300,000 views. I had an 8 hour video of the card playing non-stop on YouTube – it had over 100,000 views.

Also, I think Kickstarter projects received a lot more attention at the time than they get nowadays.

How have you grown the business to where it is today?

We were very lucky when we launched. But it’s not like we didn’t have a plan. Our plan was to make something unique that people would want to talk about. And it happened! The plan was to make a great product that was unique and shareable.

Today we focus 95% of growth on Facebooks ads. I get the most traction and results from videos and like this one. Google is pretty good but it’s not the best for me.

We also work with retailers and wholesale. We push very hard to reach out, but I’d say that 80% of our buyers are organic. Kickstarter really helped Joker Greeting get noticed by retailers and inbound requests were pouring in. Then, it was a matter of competitors seeing Joker Greeting and more requests coming in. Keep in mind, stores and retailers are always looking for new ideas that have strong sell-through. Every product on their shelf goes stale at some point. To find those retailers that were not inbound, I just had to call and email all the time; some of my bigger vendors are from these cold calls. They thought our product was a gimmick – it took 1-2 years to land those deals.

How have you dealt with competition?

It’s not a huge market, but it is niche enough that we have owned SEO since BuzzFeed and Gizmodo and ABC News used the words “Prank Greeting Card”.

A few websites have tried to copy us, but they could never beat us on SEO. And since they are startups, they have little to no capital – they aren’t going to be able to outspend me with ads.

As for the bigger boys – I am a blip on their screen and they aren’t too interested. If people are buying my cards, they must be not buying from our competitors. It will be interesting to see who comes up.

I just keep making great products and keep my customers happy – sometimes at the expense of short-term capital.

Where you are at now and what are your plans for the future?

In 2017 we sold nearly 40,000 units. We could have sold more than that but each holiday I sold out like valentines, Mother’s and Father’s Day and Christmas as well. I kept ordering and selling through. 2017 sales were nearly double 2016.

Looking forward, 2018 is already stronger looking at Valentine’s Day compared to last year, and through overall wholesale and web sales. And I have ordered 3x Mother’s Day Cards. I could see 50,000 and 60,000 units being sold, assuming no new vendors. However, With a more robust product line I will also visit trade shows for the first time so upside is higher. Not bad for a single employee.

I like to make stuff. In 2018, I will be launching a fantastic new product. Greeting cards is a platform and I just need to keep expanding our concept within the greeting card market and other paper goods. I am just going to test some pins and designs with my brother; it will be fun.

What platforms and tools do you use for your business?

I use Shopify. It has been great and I have no plans to change. It’s excellent for multi-channel sales, and it’s cheap. Also, their 3rd-party App Store is superb. It’s super simple to add new features to your store.

Judge.me has been great to get user reviews, although I’m sure many others are just as good.

Most influential books you’ve read for your business?

Make a product people want to buy not one you want to sell. If you are pushing too hard to make a sale it’s probably wrong. You will know when you have something great – the product will sell itself. You will see a much better ROI.

Check out our website at jokergreeting.com, and find us on social media at:

Joker Greeting has provided an update on their business!

About 1 year ago, we followed up with Joker Greeting to see
how they’ve been doing
since we published this article.

How To Start A Greeting Cards Business

If you’re starting a greeting cards business, or if you’re looking to ways to run your existing business better, this free 25 page guide is for you.